Here's the final Quarter-Final matchup.  Not a lot of games left to play.  Let's check out Tokra, one of the best European players and the top German competitor and his matchup against Aresius, a top Italian player and the third place finisher at European Continentals to Tokra's second place.  I'm not sure if they've personally played one another before, but they have certainly been in the same tournament.

Only one moves on to the final four.  Will it be Tokra, or will Aresius show that he's able to finish on the big stage? 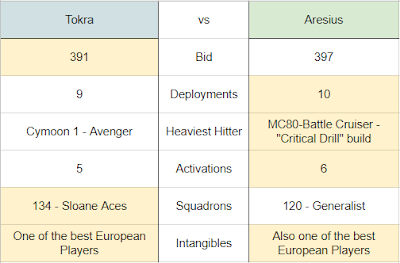 Wow, this is... not a battle anyone is going to want to watch for fun and excitement.  Nor is it a match someone with decision paralysis would like to play in.  A combined 11 activations, 16 stands of squadrons... it is going to take awhile.  However, for the experienced Armada players out there, for those that want to see a cerebral game where the outcome is decided not just by the dice but by allowing yourself or denying your opponent the chance to roll those dice, this is the game to watch.

This is the game to watch.

We have two of the best players in the game today, both showing off strong variants of the One Large + Flotilla builds, and it's going to be a fight from the start to finish.

On one hand we have Tokra, who's Large ship is built to win the squadron game early and rain long range damage while its fighters add to the damage piling up against enemy ships.  On the other hand, we have Aresius, who's Large ship is built to win the ship fight, while its transports do the heavy lifting of pushing squadrons around.  Aresius has the stronger ship in the fight, but if Tokra can get squadron support on the target, he can erase that difference in a hurry.  Another problem Aresius has is that XX-5 Turbolasers might very well be wasted points, being blocked by the Cymoon's Damage Control Officer.

Aresius does have one big advantage here though, and that is not only does he have deployments, but he also isn't tied to squadron commands with his big hitter, and can put it down in the best possible location against Tokra, while Tokra's Cymoon is going to be stuck in a spot where it is in range of its fighter deployment.

As for squadrons, Tokra has gone with a "Sloane Aces" style 8 squadron list, with all the usual suspects.  His ISD is poised to toss 5 into the fight with Expanded Hangers and tokens from the Comms Net flotilla.  In contrast, Aresius has gone with more of a generalist approach, bringing a pair of Strategic squadrons, and a mix of generics and aces for 14 points less than Tokra.  His squadrons may wind up being a speed bump for Tokra's, but his fleet's Flak can sneak up on people in terms of both damage and range, with Combat Refit transports and Toryn Farr.

I... I am not entirely sure I have a good bet here.  Both players are good and have their advantages and disadvantages.  I think there might be a slight advantage on the side of Aresius here though in terms of where his flagship goes down, which will determine the rest of the fight, so that is what I'm going to go with.

Whoever wins, this is the match to watch for this round.  Watch it live when they announce the date in the thread, watch it after they post a battle report, but I guarantee there will be something all of us will be able to learn from this fight.
Incoming Transmission From: Biggs at 00:52
Email ThisBlogThis!Share to TwitterShare to FacebookShare to Pinterest
Labels: Admiral Sloane, General Dodonna, List Building, Star Wars Armada, World Cup 2018