Whatever, we'll just deal with it. 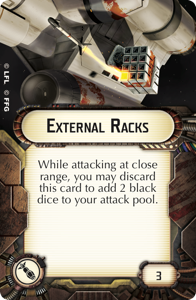 Reminder of What Can Use Ordnance:

While attacking at close range, you may discard this card to add 2 black dice to your attack pool.

Oh, hey, it's the most meaningful card of Wave 6.

You know how nobody used Expanded Launchers because... well... it costs 13 points and you'd only ever get one good front arc attack with Black dice ships in a single game, and that's a lot of points to put into something that's only getting used once?  Well, 3 points for the same effect ISN'T a lot of points.  And it works in any arc, so if you've got the shot, you can burn the Racks.

So who gets good use of Racks?  Everyone.

3 points is cheap.  2 extra dice hit hard.  But specific ships that really like this upgrade are the cheaper ships like the Raider I-Class Corvette and the Hammerhead Torpedo Corvette.  Ships that don't want to take more expensive upgrades or have the natural dice pool to go around fishing for critical effects if they can just do normal damage.

The MC75 Ordnance Cruiser is another option, as it has 2 Ordnance slots, and wants cheap upgrades in order to fill both.  The extra black dice can combine with the natural dice to help push towards a critical effect.

The MC75 Armored Cruiser is yet another option, this time because while it has an Ordnance slot, it does not have a lot of natural Black dice, and thus needs to focus on non-critical effects to get any use out of the Ordnance slot.


A Note on Timing


The card is used during the Modify Dice step, after your attack is rolled.  That means that it cannot be used to boost an obstructed shot that removed the only remaining die attack.  It also means that you can see what you rolled before deciding whether or not to add the additional dice with use of the card.
Incoming Transmission From: Biggs at 08:00
Email ThisBlogThis!Share to TwitterShare to FacebookShare to Pinterest
Labels: List Building, Ordnance Upgrades, Star Wars Armada, Strategy, Wave 6