Elimination Round - Tokra vs themightyhedgehog

We are still waiting for the final game of POD#7, which should take place tonight.  Here's the last of the previews before that game takes place - Tokra vs themightyhedgehog! 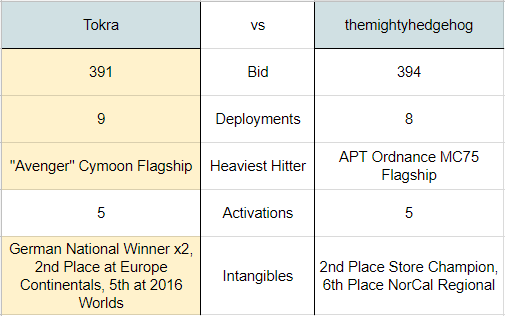 So... on paper this doesn't look like a spectacular matchup for themightyhedghog.  Tokra has gone all in on Admiral Sloane, taking Avenger on a Cymoon flagship, and winning the squadron game.  He's brought a squadron compliment best described as "Sloane's Aces" - Howlrunner, Mithel, Valen Rudor,  Ciena Ree, and Saber Squadron - to punish enemy squadrons and contribute (thanks to Sloane) in anti-ship bombardments.  His big weakness is that he is dependent on those same squadrons for anti-ship duty, as the only other ship he has that could be considered a combat ship is his flagship, which is more tuned towards helping the squadron game than hitting hard.

Hedgehog's advantage in this match comes from having multiple combat ships, and a squadron tuned towards high hull and survivability.  YT-1300s are great defensive squadrons, if they can keep up with your fleet.  Jan Ors can help keep them alive from the Alpha Strike Sloane can deliver, and because Jan is the only unique, the Sloane ability is worthless for attacking those squadrons.  The question is, can the CR90s avoid trading long range shots with the Cymoon's front arc, and can the MC75 close in to unload on it?  To add another issue to consider - Hedgehog has no real great way to challenge the 100 points tied up in flotillas, so his points are going to have to come from that ISD, or from objective play.

Smart money is on Tokra in this one.  He's got the better matchup on paper, and on the table I think.
Incoming Transmission From: Biggs at 08:00
Email ThisBlogThis!Share to TwitterShare to FacebookShare to Pinterest
Labels: Admiral Sloane, elimination rounds, General Dodonna, List Building, Star Wars Armada, World Cup 2018