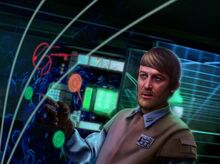 Regionals season is behind me, so it's time to look have a hard look at my (poor) choices for the last few months. Madine scored me 9th place at my Regionals. That's a bit disappointing on my end as that's a drop from last year. Either I'm getting worse at this game (very possible) or I need to stop trying to make niche commanders something they're not (hey, I recognized Rieekan early on, didn't I?). Bellyaching aside, let's dive into the postmortem.


First, a quick reminder of the list I finished my Madine run with:


= 92 Points
GR-75 Medium Transports (18)
= 18 Points
GR-75 Medium Transports (18)
= 18 Points
Squadrons:
• Tycho Celchu (16)
• Shara Bey (17)
• 2 x VCX-100 Freighter (30)
= 63 Points
Total Points: 400
What Worked
Man do I love the TRC90 with Engine Techs and Madine. I can't talk this little ship up enough. It's so damned fun to fly.  More importantly, it's never out of the fight. It can flip around 180 degrees in a single turn, it can accomplish a more or less lateral movement to avoid drifting into range, and it can paste flotillas without so much as firing a shot. It does all this while providing steady, consistent damage from long range. It was worth every penny of the 59 point investment.

I also really liked what Madine did for the MC30. One of my biggest problems with this ship has always been trying to stay engaged after the first pass. Getting three extra clicks from a Madine dial+token helped with that tremendously. The MC30 was easily the heaviest hitter in the list, so opponents often based their movement on what the MC30 was doing. I had more than a few games where I was able to fake out my opponent because of Madine's flexibility by appearing to swing out wide with the MC30, only to swing drastically back the other direction and catch them flat-footed.

Overall I matched up very well against Avenger based lists. More often that not, I could out manuever the beast. Even if I didn't, my MSU approach meant it didn't have a juicy target for it to knock out with Boarding Troopers. In all my games, I never lost against a list with an ISD. Zippy little CR90s are aggravating like that.

What Didn't
I practiced against Sloane. I practiced against Rebel squadrons. I failed to account for straight Imperial bombers, which ended up being my undoing. Both my Regionals losses where against Imperial squadrons that could keep up with my speed and peck away at one hull zone. Tried as I might, my limited squadrons just couldn't keep up. I might have been able to do a little better with A-Wings instead of VCXs, but I'm not certain. They would have died easier, so the likely would have only tied some things down for a turn or two longer. The VCXs helped me in other ways, so I' not sure the overall result would have been much better. Squadrons in general are hard for Madine. You want to be using that nav dial all the time, which means you either have to go squadron light, or Rogue heavy, neither of which work well in the current meta.

I also knew going into Regionals that a Death Pickle was a major problem. I tried to offset that by being better at the strategic game, which may have worked. I'm not confident in that assessment, though. Others who have used my list have reported similar difficulties, even when trying to play the strategic game.

Wave 7 Potential
I'm torn on how I could do Madine in a wave 7 world. On the one hand, my MSU approach alongside Madine's natural flexibility is exactly what you need to deal with Raddus, someone I expect to dominate this wave. On the other hand, MSU does not fare well in this wave. EWS alone would cripple my Madine list as it stands. Seeing as many are experimenting with EWS to combat the squadron menace. All I know is my time with Madine, like Garm, has come to an end. It was a good run, but I'm ready to try something different.
Incoming Transmission From: Truthiness at 07:00
Email ThisBlogThis!Share to TwitterShare to FacebookShare to Pinterest
Labels: After Action Review, General Madine, List Building