Hooray, Wave 7 is here for Star Wars: Armada.  I was excited to pick my new ships up last week and it worked out that one of the local shops, The Portland Game Store, was having a seasonal kit tournament.  I figured it would be a great chance to not only try, but to play against some of the new toys from Wave 7.


While the temptation was strong to drop everything and try totally a new fleet build, instead I decided to modify an existing Ackbar fleet that I had with what I think will be his favorite new upgrade, Intensify Firepower!.  I was actually as curious to find out what it would be like to play against the Wave 7 stuff as to play with it and playing something that I knew seemed like the best way to evaluate things.

Here's what I had: 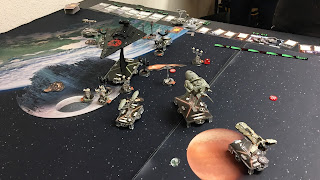 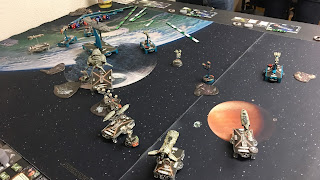 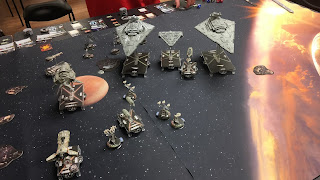 Round 3
For my own fleet I found IF! to be absolutely invaluable.  It just completely changed how my fleet performed allowing Ackbar so much more consistency in the red dice attacks.  I can't imagine I will play Ackbar without having an IF! Pelta along for the ride.  The Pelta actually worked great in the trailer role and was responsible for killing 2x ISDs and a Quasar in one game!

All told it was a fun day and a great chance to see some new toys in action.  I am already looking forward to my next Wave 7 adventure.

Incoming Transmission From: shmitty at 13:23
Email ThisBlogThis!Share to TwitterShare to FacebookShare to Pinterest
Labels: Wave 7