When One Ship is Enough

We had a pause in our Corellian Conflict this week so I had the chance to try out a fleet concept that I have been excited about, the Raddus Nesting Doll fleet.  I've been playing a variation of it in the campaign, but wanted to try a 400 point version to see how it plays.

Getting a nesting doll fleet to 400 points was tricky, so I decided to make something of an unconventional move.  Only starting with one ship on the table.

I know as well as anyone the power of having lots of activations and deployments in a fleet.  Intentionally handicapping myself by only having a single ship seems a bit foolhardy.

But hey, let's re-frame this into a positive thing.  I am not wasting points trying to keep up in the activation or deployment race.  I don't have to worry about a Strategic Adviser filling my officer slots.  By embracing that I will be out-deployed and activated I can adjust my tactics accordingly and possibly have some of the points my opponent spent on activations become wasted.

Here is the fleet that I played:

My opponent had a fleet where he was trying out most of the new Wave 7 toys for the Imperials.  He had both Cymoon and Kuat ISDs supported by Demo.  He was running Screed as his admiral as he was hoping to pull off the Heavy Ion Emplacements/Assault Concussion Missiles combo on the Kuat using Fire Control Teams.

I had the lower bid and opted to go first.  I ended up selecting his Targeting Beacons thinking that it wouldn't hurt too badly. 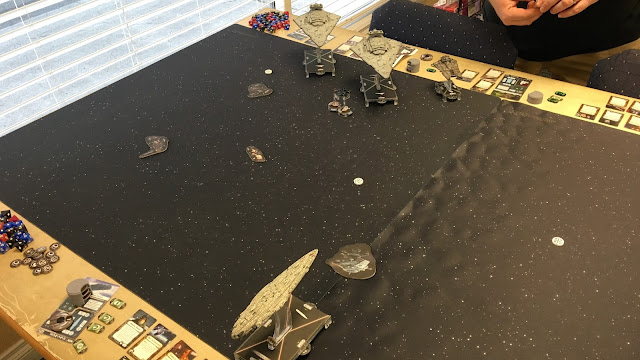 Deployment is easy when you're 1st player and only have one thing to deploy.  I just went with a very neutral deployment and planned a bunch of Nav commands.  He was wary of Raddus so he deployed with some depth so that it would be hard for me to drop ships in behind him.

I headed off to the right away from his forces.  with only one ship, my biggest concern was being ganged up on.  So, staying away from his fleet seemed smart.

I apparently didn't take a photo of this round, but it wasn't very interesting.  Just me staying at speed 1, but using Engine Techs to manage the distance between our fleets.  Having one ship and going first makes the turns go fast.

I considered a Raddus drop this round, but it would have put me in a bad spot.  He started moving Demo to cut off the path pf Defiance and so I decided to turn in a bit and hopefully force the Kuat to move into my range.  It not only did that, but drifted into a double arc.

It was definitely time to drop the Raddus bomb.  I am still getting a feel for how to do this best.  I opted to drop Profundity in front of Demo to cut off its escape and set Garel's Honor to have a nice double arc on Demo's flank.


Garel got the turn started by having Jyn Erso do a Raid on Demo.  I gave it Raid tokens for Nav and Con Fire.  I was worried that with a Nav command it could escape from Profundity's front arc, but the Raid would shut that down.  Garel then fired away and did enough damage to force Demo to burn its Brace and redirect tokens with the ram also turning up a Projector Misaligned crit.  All in all, not bad for the little ship.

Demo then went and took a front shot at Profundity, which hurt, but wasn't too bad.  Unfortunately, after a bunch of finagling with the maneuver tool he was able to find a spot where he could move and turn just enough to also get Profundity with a side arc.  I had deployed about a half a centimeter too far back... oops!

Profundity survived to take its turn, but was hurting after multiple whacks from ACMs.  It fired first out of its front and easily killed Demolisher as a bit of revenge.  Then it fired out the side and was also able to use Caitkin and Sholan to find the crit to set off Ion Cannon Batteries and remove an Engineering token from the Kuat.  A quick blast from Ordnance Pods against his squadrons and Profundity moved up into the Kuat's side arc.  But it still wasn't done.  Using Flight Commander it then dropped Gold Squad and the 2 B-Wings out of the Rapid Launch Bays and proceeded to bomb the heck out of the Kuat.  Good times!

The Kuat of course answered back and was able to use Screed to proc both Heavy Ions and ACMs on poor Profundity.  It was just more than it could take, so Profundity dies without getting to use its Reinforced Blast Doors.  It at least accomplished a lot in its short time in the game.  Then Kuat then took a shot at Defience, who wasn't too impressed.

Defiance than took that double arc shot it had setup on the Kuat and proceeded to roll 13 dice over the 2 attacks thanks to both Defiance and Quad Batteries adding in dice for both attacks.  It did not go well for the Kuat and it went up in flames.

Not a bad turn, although a mistake had cost me Profundity I still came out ahead in the exchange.

I moved up Garel's slowly, but made a mistake in doing so.  I wanted to move it first so that I could use Defiance against the Cymoon.  So, I dropped to speed 1 hoping to stay out of long range.  I didn't and was nearly killed by the Cymoon's return fire.  If I had moved Garel's second I could have avoided the shot and setup a ram the next turn.  Instead Garel's just died ineffectually the next turn.  Oops.

The Cymoon and Defiance traded some shots, but didn't have enough time to kill each other properly.

We didn't add up points, but it would have been fairly close either way.  I did however learn quite a bit and it was a really fun game.